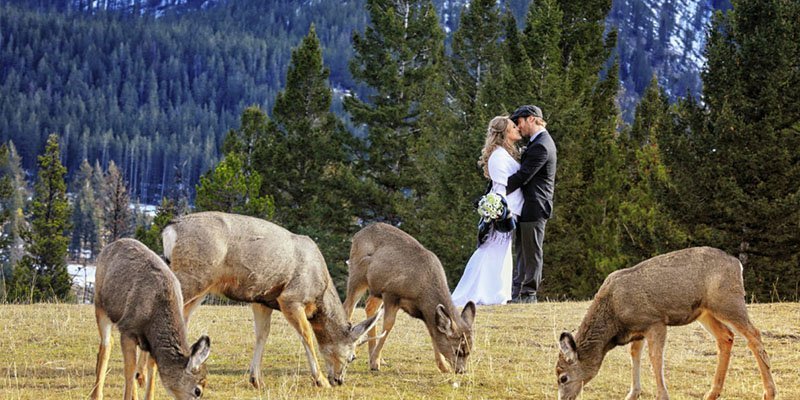 Jessica & Ben wanted to get married on their own terms.

They wrote their vows themselves.  They declined to have a wedding commissioner or minister do the honors. There were no guests, no fanfare, no fuss, no stress.

Just the natural beauty of the mountains in the park as the “venue” and Troy and myself as their witnesses.

There is power in simplicity, in being true to yourself and living authentically.  That power is palpable and attracts a unique kind of attention.  Jess and Ben had not invited any guests to their personal experience, none-the-less, guests arrived.  As they were saying their vows, a small herd of deer began to surround them. Shy at first, noting the couple in the meadow from a short distance, they edged closer and closer until they were, without a doubt, an integral part of the wedding.

But a most welcome, if unexpected, addition.

Jess & Ben were so enraptured with each other and engrossed in reading their wedding vows, that I suspected they didn’t notice how close the deer had come until their ritual had ended.  The look of surprise on their faces was genuine.

The rest of the ceremony continued on in a delightful stream of perfect moments.  There had been a wedding earlier in the day at the Tunnel Mountain meadow and the signing table was still set up.  We simply strode over to it and used it ourselves as if it all had been planned in advance.

In typical mountain fashion, the weather supplied a variety of experiences from gorgeous sunlight to a heavy snow fall.

And no matter what the conditions, Jess and Ben were all smiles.

After a small champagne celebration, we brought the couple to some of our favorite portrait locations around Banff.

We reconvened at the Storm Mountian Lodge, a charming, rustic lodge build in 1922 by the Canadian Pacific Railway to promote tourism in the Rocky Mountains. It is situated at the top of the pass on Highway 93,  about 25 minutes from Lake Louise.  By then the snow was coming down hard.  Jess, Ben, Troy and I had a great time in the snow outside of their cabin playfully offering suggestive storylines to get the newlyweds to turn up the heat and make some sexy images.  This couple didn’t need too much coaxing!  And before long, it was time to go. 😉

Jess & Ben, you guys rock.  We loved our time with you and were honored to share in your intimate wedding ceremony.  It was magical indeed.