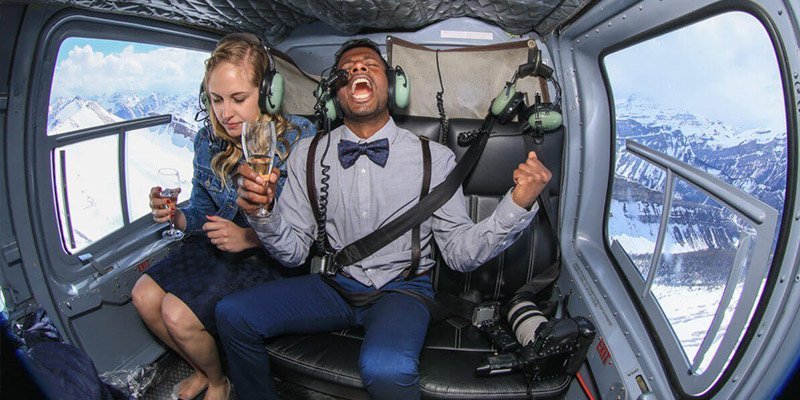 Looking for a killer way to propose to your sweetheart? Check out Paul’s spectacular mountaintop marriage proposal!

Paul called me on Monday asking me if we were available on Friday to photograph his marriage proposal to his girlfriend, Sam.

“HELL YES!”  was my answer, because I adore hiding in bushes and secretly snapping away at unsuspecting future brides.

But it got better.

Wanting to do something unforgettable, Paul was planning to take us all up in a helicopter to Marvel Pass in the Kananaskis Country of Southern Alberta.

Paul is a photographer himself and wanted to have a stunning environment as the backdrop for his love.  You go, man!

We spent the next hour collaborating on a plausible cover story; after all, it would be hard to hide Troy and myself in a helicopter!

We decided that plain sight was the best solution.  Paul would tell Sam that I was a former colleague from work who needed some models to shoot a promo video for Travel Alberta.  Genius.  Sam bought it hook, line & sinker.

We meet Paul & Sam at Rockies Heli Canada headquarters in the Kananaskis Country.  Paul had arranged for an hour tour to give us time to make engagement portraits while on the top of Mt. Marvel.  The flight into the mountains was spectacular.

We arrived at a gorgeous high alpine meadow where the snow was deep and the penetrating silence sublime.

We were able to set up our lights and equipment right before Sam’s eyes and then, right on cue, Paul got down on his knees and popped the big question.

It took some convincing on his part that he was not joking and it all wasn’t part of the promo, but Sam did say “yes”.

The rest is history.

Congratulations to the happiest couple meet.  I’ve never seen smiles so big.  It was awesome.

Thank you for allowing us a part to play in your love story.