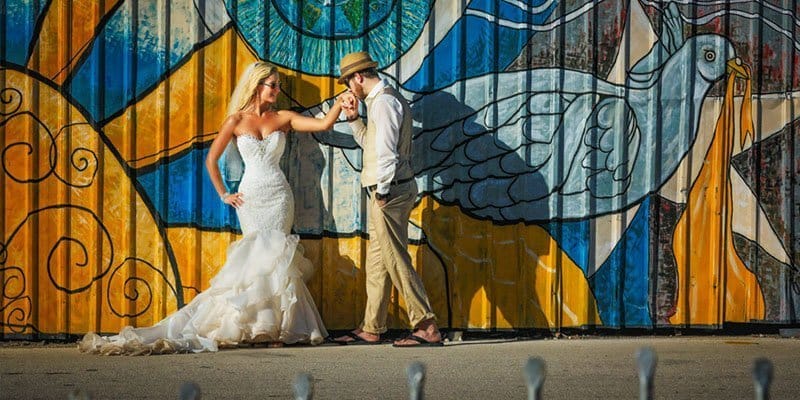 Cuba is exotic, hot, left behind and lost in time. The perfect place for a sultry destination beach wedding.

Rob & Crystal treated their family and friends to a unique wedding experience at the all-inclusive resort, The Warwick Cayo Santa Maria, on a small island off the coast of Northern Cuba. The cayos (keys) make up a larger archipelago that is part of a protected marine sanctuary called the Jardines del Rey (The King’s Garden).  It is connected to mainland Cuba by an extraordinary 48 km causeway called the Pedraplen.  There is little development on the keys with the exception of a handful of resorts which makes for mucho solitude along the miles of secluded beaches. Can you say “paradise”?

Many of Rob & Crystal’s guests arrived in time to celebrate New Year’s Eve with them.  The resort was on fire with dancing and carnival-style celebrations.  Fortunately for Troy and I, this was also the day we stopped by the resort to say hi to Rob & Crystal and confirm details for their Jan 2nd wedding.  It was definitely a great time to meet & greet everyone and captured some fun, impromptu pre-wedding footage.

After the dancing, Troy & I rented a moped at the Warwick and headed back down the causeway to the town of Caibarien were we were staying with a Cuban family, Juanito & Clara, in their Casa Particular, Hostel Calle 12.  Cuba was alive with fireworks, dancing, drinking and all manner of mayhem.  Throughout the little town, life-sized dolls were erected on the verandah of people’s houses.  We thought it was peculiar, but hey, this is Cuba. We weren’t expecting Auld Lang Syne! Back at Juanito’s casa, the party was in full swing and we were happy to join in.  We spent the evening drinking rum in the streets with the neighbors, playing kickball with kids and trying not to get run over by motorbikes in our drunkenness.  At midnight, the “dolls” were lite on fire as an effigy to the old year.  It was spectacular if not exceedingly safe. The highlight of the night for me was the appearance of a trumpeter who walked the streets playing “Happy Birthday” in perfect pitch on his trumpet.  Awesome.

The wedding was a few days later.  Ample time for everyone to sober up.

The ceremony was held on the beach.  It is a good thing there are 2 of us because it was not a long, drawn-out affair.  Rob & Crystal exchanged their vows, they were given some “rules” to abide by according to the local Latin American marriage culture and then it was on to a huge beach party.

It took a lot to separate the newlyweds from their adoring friends, but we did manage to get the couple alone for some beach portraits.

A nearby gazebo provided the perfect spot to practice their first dance.

The party resumed at the resort ballroom where guests were anxious to reclaim the newlyweds.  It was a raucous evening of speeches and dancing.  The wedding cake was brought in and then, to everyone’s surprise, it was lite on fire!  Don’t see that everyday, eh?

As Troy and I were packing up our equipment and heading out, there was one more completely unexpected surprise. It was my birthday and Rob & Crystal had remembered. They made an announcement to the room and the entire wedding party sang “Happy Birthday” to me, in both English and Spanish!  I was so stunned. I actually began to cry.  Thank you guys for that.  It was a birthday to go down in the books!

The next day, we meet Robbie & Crystal for an afternoon long Trash the Dress session. They had hired this amazing classic Cuban car and driver to chauffer us around.  Before we had left Canada, we had discussed taking them off the resort to capture more gritty, unusual images of them in small town Cuba. We knew we would have lots of opportunities to get beautiful ocean shots on the day of the wedding.  We wanted something more authentically “Cuba” for the Trash the Dress session.  The town where we stayed, Caibarien, was perfect.  It had gorgeously dilapidated buildings everywhere and a colorful, genuinely local feel.  Troy and I had scoped out locations off the beaten track to take our victims, I mean, newlyweds, that had a distinctly Cuban flavor.

The first stop was a wall with a huge mural of revolutionary legends Fidel Castro, Che Guevara and Camilo Cienfuegos.  What could be more Cuban?  What we didn’t know was that the wall was behind the guarded gate of a military base and they were not too happy to see a car full of gringos pull up to take wedding pictures.  It took a lot of persuasion on Troy’s part and a trip to the boss’s office to convince them that we weren’t enemies of the state looking to steal Cuba’s secrets.  Even the chauffeur was beginning to eye us suspiciously and wondering just what he had gotten himself into.  Eventually, we got the ok to stand just a few feet inside of the gate.  It wasn’t the shot I had in mind, but I was happy to not have my camera confiscated and have any kind of access at all.  The tension eased when a smiling old matriach came running out of a barrak to take a selfie with the bride & groom.

Our next stop was to a ram shackled wall of a decrepit, yet still fully operational, bus depot that I had earmarked a few days before while scoping around for photo sites on our moped.  The crumbling wall had a bricked in window that was perfect, IMHO, to showcase the bride.

Crystal was hot!!! I mean, literally.  It was 40 C and the sun was bearing down mercilessly on us.  We would have given the poor girl a cold drink and a break, but the hot & bothered look was TOTALLY WORKING!  (Sorry Crystal Honey, you just looked too good all sweaty like that.)  We put a cigar in Robby’s hand and watched the two transform into something mysterious.  No longer were they the two innocent lovebirds just married the day before.  Under the sizzling sky,  Rob took on the persona of a 1950’s mafia boss and Crystal his too-hot-to-handle trophy wife.  Good times.

We did eventually give them a break, cooling off with much anticipated cold beers in Caiberian’s main plaza.  We took advantage of a colorful mural and captured some candid shots before heading back to the beach just in time for the last light of sunset.  As the light faded, the cigars burned down and the mosquitoes emerged, Robby & Crystal finally got to do what they had been waiting all day for— a dip in the ocean in their wedding attire.

It was a Trash the Dress session after all.

Thank you, Robby & Crystal, for an amazing adventure we will never forget.  Cuba Libre!