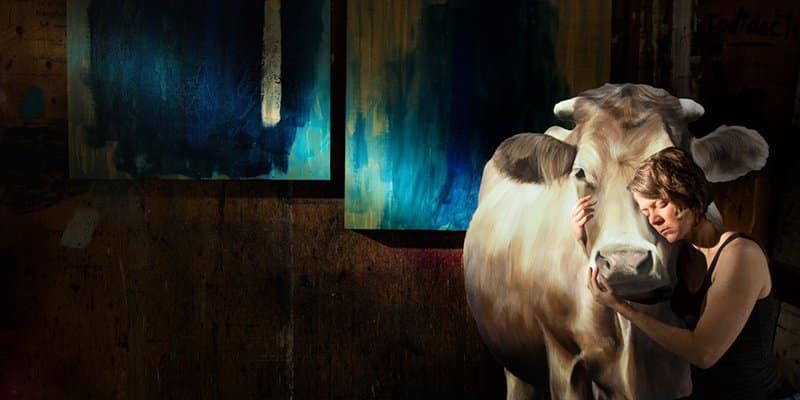 Shirleen Burnett, is on exhibition in the One White Wall space at Elevation Gallery on MainSt. in Canmore until April 23, 2016.

Art is an amazing doorway into another world—a world we share, but as different as an alien planet because it is the world as experienced by another.

Art is an intimate invitation to gaze into a fellow human’s heart and feel what they feel; to look through their eyes and see what they see.  Their emotions and experiences, their psyche and very soul is laid bare before us for our contemplation.

“Artist—Art—Artist” is my exploration into the world of two local artists, Chrissy Nickerson and Bigoudi (Pascale Ouellet).

I studied them in their work space attempting to gain insight into their unique creative processes.  I wondered,

How did each of these creatives take their particular vision and manifest it as art into the world?

What goes through their minds when confronted by a blank canvas?

I have to admit to you, I went into this project wearing the lenses of my own creative experiences, a bit like a North American traveller leaving their country for the first time and expecting to find western culture in the far East.  I imagined these artists to be quiet and contemplative before a blank canvas because that is how I behave when confronted with the sublime yet formidable task of creating my work.  I composed portraits in my mind of what their creative process might look like but my pre suppositions were entirely wrong!

Therein lies the beauty of our uniqueness.  We share the same spaces, we see the same landscapes and yet, our perceptions are as foreign as they are familiar.

“Papaya Love” & “Caffeine & Color”,  Each printed on 60″ x 40″ canvas
Chrissy Nickerson does not sit quietly in front of a black canvas in contemplation of the work she is about to endeavor.  She is movement.  She is a whirlwind of caffeine and color, tossing about sketches and photocopies of the landscapes she is recreating.  Her inspiration is literally on pages all over the floop and she’s stepping on it and kicking it aside as she paints.  I found it informative, inspiring, invigorating and ever so slightly unnerving to watch her, being the precision freak I am!

These portraits are true to my artistic process, but not necessarily Chrissy’s!

Chrissy is all about movement. She is a whirlwind of caffeine and color! To stay true to her style, I felt I had to capture that movement. That is what inspired the short movie.

Bigoudi’s studio was no less chaotic than Chrissy’s, but I felt a calm, serenity there.  Maybe it was just the fact that her little boys, Theo & Toby, ages 6 & 4 were not home!  Both Chrissy & Pascale are parents to 2 little boys.  How they manage to be the prolific artists they are is nothing short of a miracle and a mystery.

The painting from where the cow originates is entitled “Papaya Whip”.  Pascale admitted that naming her pieces is often a challenge and so she finds inspiration from the name of paint colors.   The title of a piece is an important, albet overlooked, aspect  of the work. Often after I create a piece, I’m irritated by this, thinking: isn’t it enough that I created it?  Now I have to find a clever name for it as well !@? And, usually by this point,  I’m feeling like I’m all out of creativity!  So I thought Pacale’s work around was ingenious.  As a nod to her, I named my own piece “Papaya Love”. 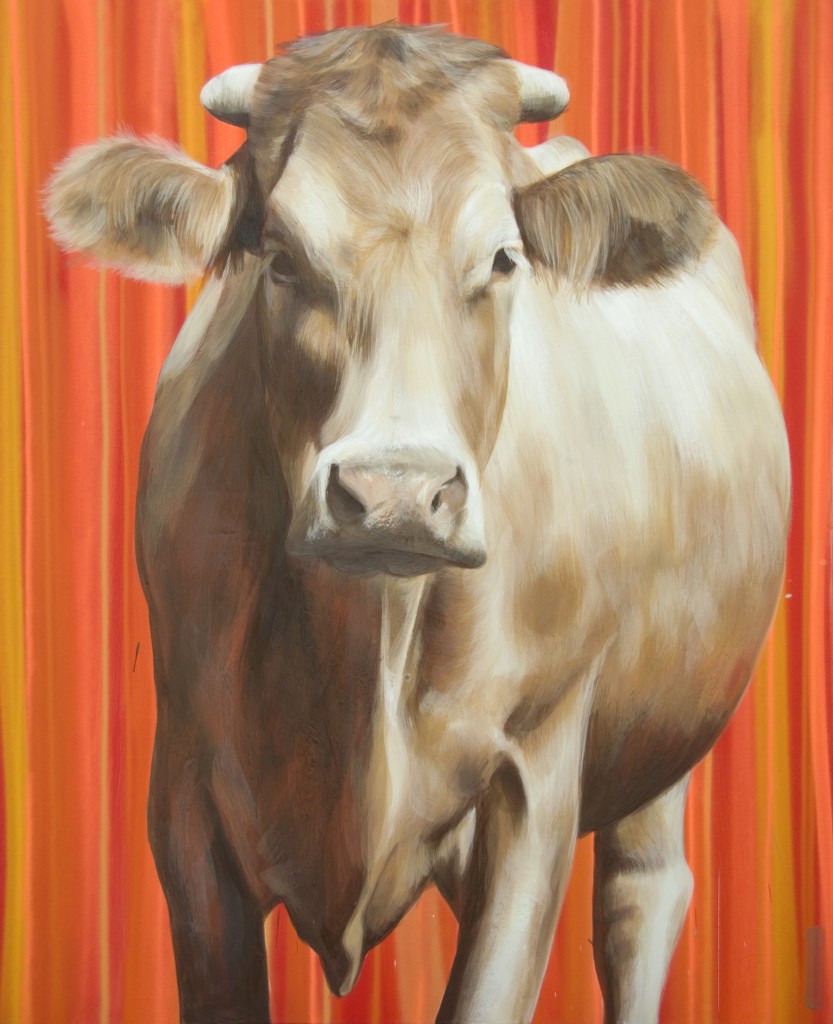 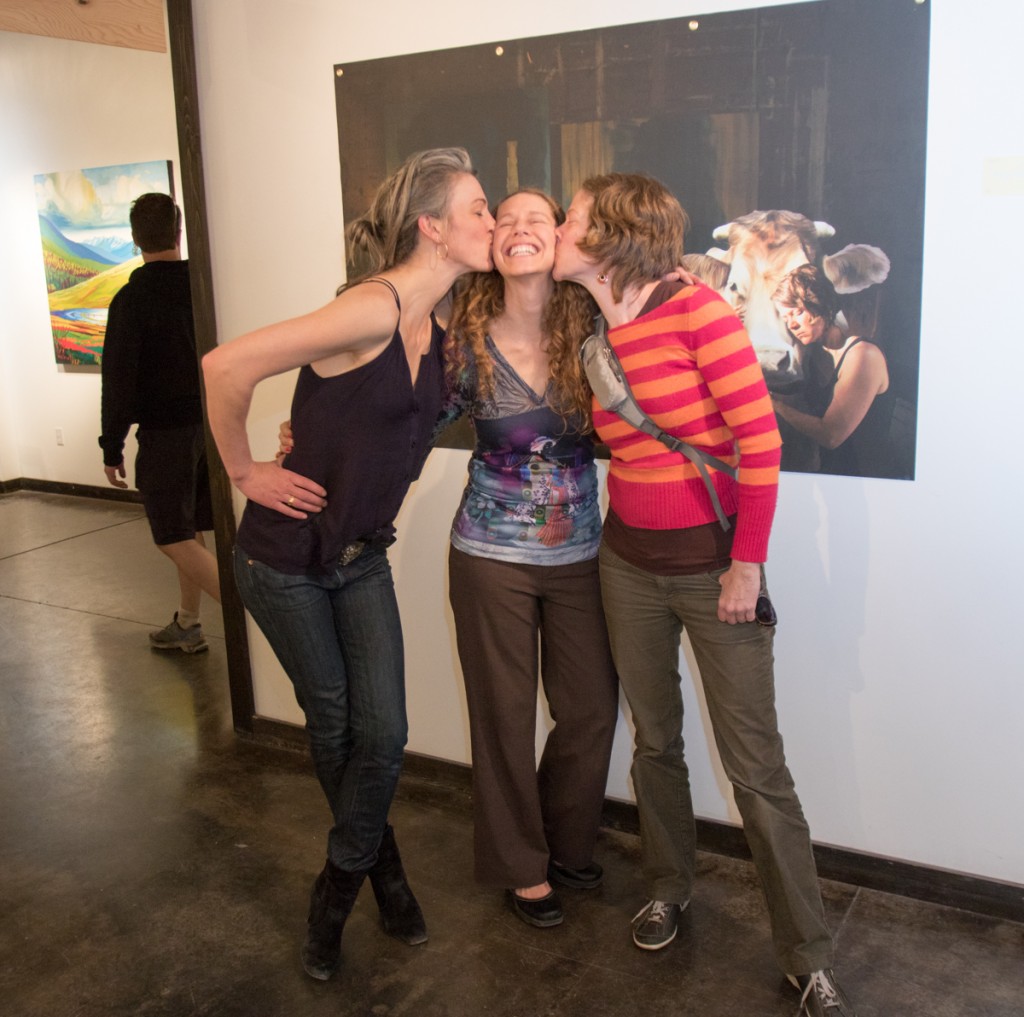 Artist: Bigoudi
Bigoudi, a.k.a. Pascale Ouellet, has been a professional artist since 2004. She has many awards and credits to her name including the 2007 and 2009 Canmore Mayor’s Awards for Arts & Culture. She has many recognizable images and public installments around Canmore and western Alberta. You can learn more about her work at bigoudi.ca

Artist: Chrissy Nickerson
Chrissy Nickerson has been rendering the Canadian landscape from coast to coast as a professional artist since 2001. She has several awards and credits to her name including the Canmore Mayor’s Award for Emerging Artist of the Year in 2007 and Mayor’s Spotlight on the Arts Award in 2015. Find out more at her webiste cnfineart.ca

Artist: Shirleen Burnett
hirleen Burnett is a former Los Angeles, CA based artist and photographer and has been a working professional since 2006. She runs a photography business that specializes in wedding & boudoir portraiture. Expressing her artistic vision in her personal life and professional career keeps her motivated in and grateful for this incredible life she is living and the wealth of inspirational people who make it so special.

I owe my gratitude to the following people for making “Artist—Art—Artist”  possible: 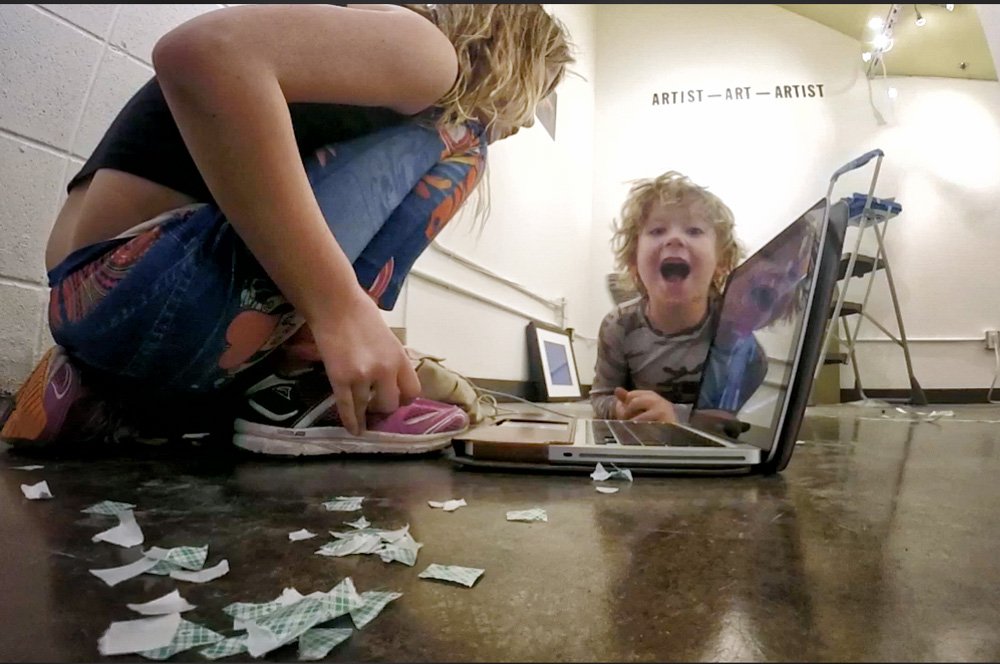 “Artist—Art—Artist” will be on exhibition in the One White Wall space at Elevation Gallery until April 23, 2016.  Check it out and let me know what you  think!