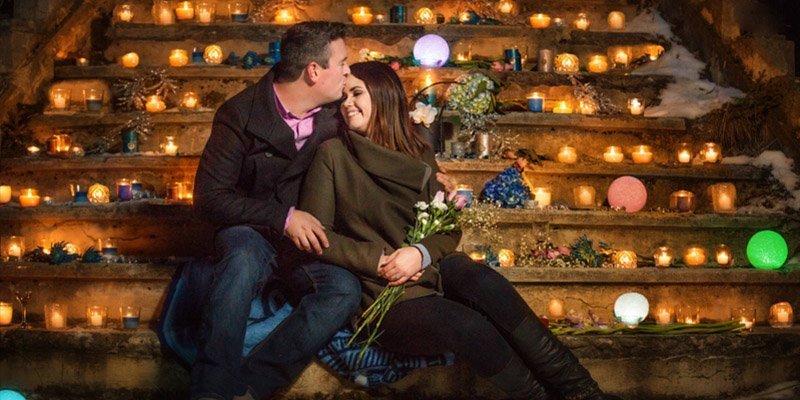 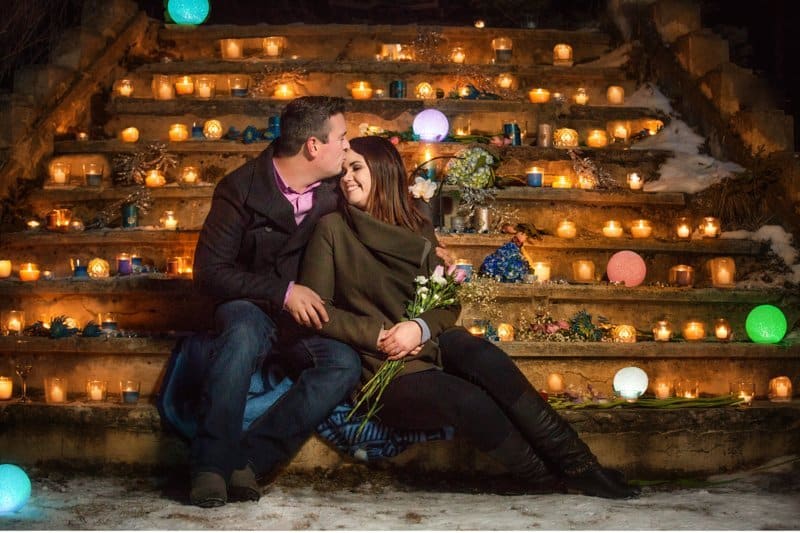 Thinking of proposing and looking for inspiration?

This Banff proposal goes down in books as one of the best!

Andrew was looking for a unique and emotionally powerful way to propose to Erin.

He had planned a weekend escape to Banff simply to “get away” from their hometown in Saskatchewan, at least, that is what he told his girlfriend. The truth was that he was determined to surprise her by popping the Big Question while they were away in the Canadian Rockies.  He was sure she wouldn’t be expecting a proposal. He had just won a trip to Europe at a church raffle which they planned to take after the new year.  “I’ve never won anything in my life!”, he excitedly explained to me. He was certain that Erin thought he would propose on their romantic European holiday.  Taking advantage of this misdirection, he contacted us after reading  my blog The Best Wedding Proposal Site in Banff to discuss creating an experience for Erin that would be truly unforgettable.

We had three weeks to come up with a plan– a plan for good weather, a plan for bad weather, a plan for all manner of chaos and unforeseeable scenarios!  Andrew was designing a double whammy for Erin by co-ordinating the arrival of her 3 best friends–all hailing from different provinces of Canada.   We didn’t know when they would be arriving, or even when he and Erin would be arriving.  In a nutshell, the plan was to be prepared and very flexible!

As the details came together, one thing we did know was that the proposal would be happening around dusk. Twilight in the mountains in November happens in a matter of minutes.  It would be nearly impossible not to use artificial lighting, but how would Andrew account for the obtrusively bright flashes going off in the darkness to Erin?  We wanted to film the event clandestinely.  Thankfully Andrew is as clever as he is creative.  He would tell Erin that they were invited to visit the set of his filmmaker friend, who just happened to be in Banff that same weekend, filming a documentary for the Banff Mountain Film Festival.  Since Andrew did have a buddy in the documentary industry and it was the weekend of the Banff Mountain Film Festival, this seemed a plausible excuse.

We decided on the entrance steps of the remains of the Holy Trinity Church located in lower Bankhead in the Banff National Park.  Bankhead was a mining town in operation from 1904 to the early 1920s.  The church was constructed in 1908 and salvaged after Bankhead became a ghost town.  It was literally cut into pieces, disassembled, placed on railway flat cars and reassembled in Calgary where it continued as a place of worship until 1962.  The entrance steps and foundation are all that remains of the church today.  It is a hidden treasure found along the Lake Minnewanka Road, a secluded, out-of-the-way place perfect for an intimate moment.  And as an added bonus, it is surrounded by brush and trees–an equally perfect place for Troy and I to hide while we were filming.

What could go wrong? 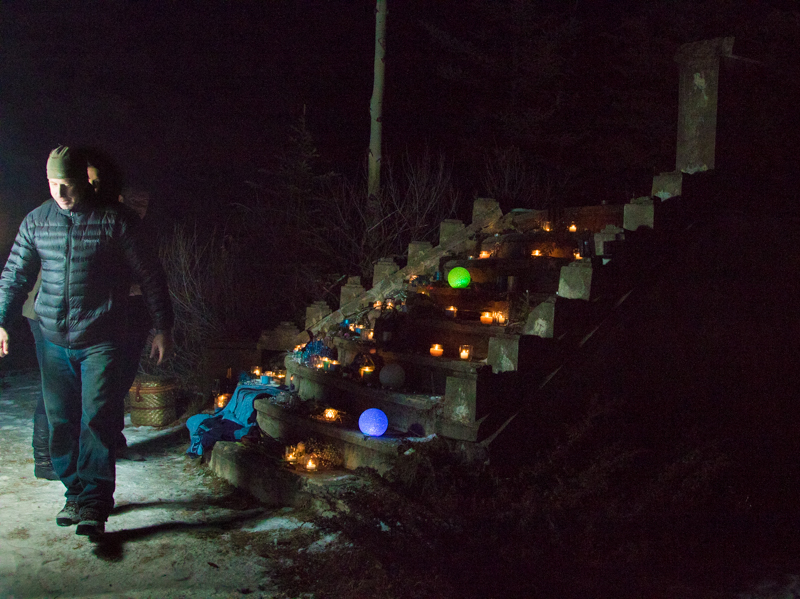 The fading light, cold and wind made for challenging working conditions!

Troy and I arrived with ample time to set up.  We decorated the otherwise barren steps with flowers, branches, crystals and various adornments of blue, purple, white and silver.  Over 100 candles were lit and re-lit again and again as the wind played havoc with our decorating efforts.  It was cold and I hoped that the 3 dozen roses, hydrangeas and other assorted flowers we had spread about the stairs would refrain from freezing!  Head lamps would have come in handy as the light was fading quickly and it was beginning to get hard to see anything!   Still, it could have been worse.  All was going according to plan.  The stage was set.  We checked our watches.  Andrew had texted his ETA.  We had a few moments to hit “play” on the video recorder, start the stereo that would be playing Erin’s favorite music and position ourselves in the bushes to wait…

It wasn’t long before a curious young couple pulled off the road and followed the candle lit path we had laid out for them…
I held my breath and got ready to shoot, but Troy had been seen!  I could hear them asking questions…

“Are you filming something out here?”

“Do you mind if we check it out?  We saw the lights from the road.  We had to stop and see what was going on.”

Troy tells them to go ahead.  Now I can see the couple.  She looks excited.  They both look pretty enchanted by the scene.  They pull out their cell phones and start taking selfies with the steps behind them.  Then they sit down and take it all in.  Meanwhile, I’m shooting like crazy and the flashes are all firing.  They don’t seem to notice.  That’s good.  But….he’s taking his time in proposing.  I don’t think the flashes will last very long in the cold…I hope he gets on with it!  He must be nervous…It will all be fine, I tell myself.  Just relax and give him a moment.  They continue to sit there chatting and occasionally asking Troy questions about the “documentary”.  No bent knee, nothing overly romantic.  This guy is cool as a cucumber!  A few more minutes pass and I wonder if maybe he is waiting for some direction from us, so I shout out from my hiding spot something about sitting down in the middle of the steps.  How that is a better position for a selfie photo.  My voice completely startles them, I’m hiding after all.  And then I feel compelled to ask:

“What are your names?”

We were waiting for Andrew and Erin! 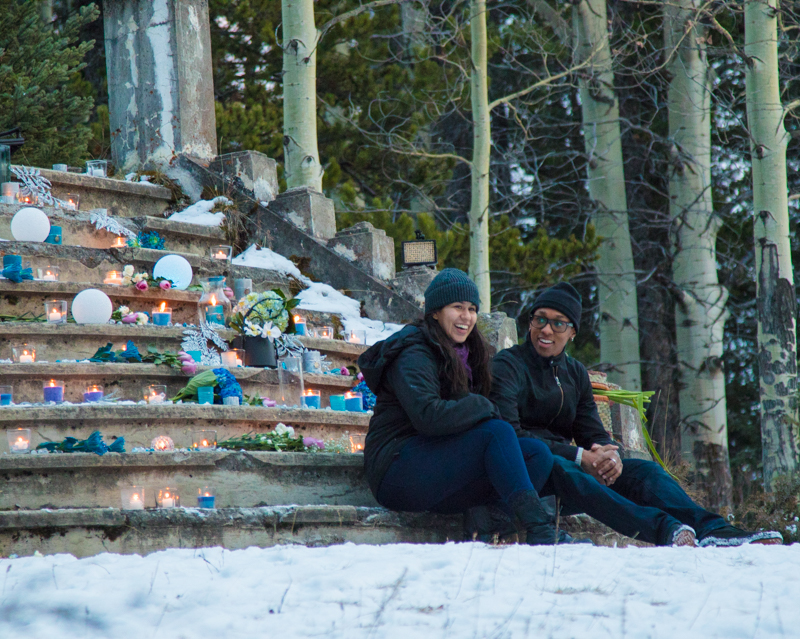 Needless to say, Devin, Olivia, Troy and I all had a good laugh as we told them about Andrew’s plan.  They were good sports and quickly left.  It was back to the bushes for Troy and I.  While tucked away in the foliage I couldn’t help wondering if Olivia had thought that Devin was going to propose and who else might decide to investigate the mysterious candle glow on the abandoned church steps.  I have to admit I broke out in sweat when Parks Canada drove by! 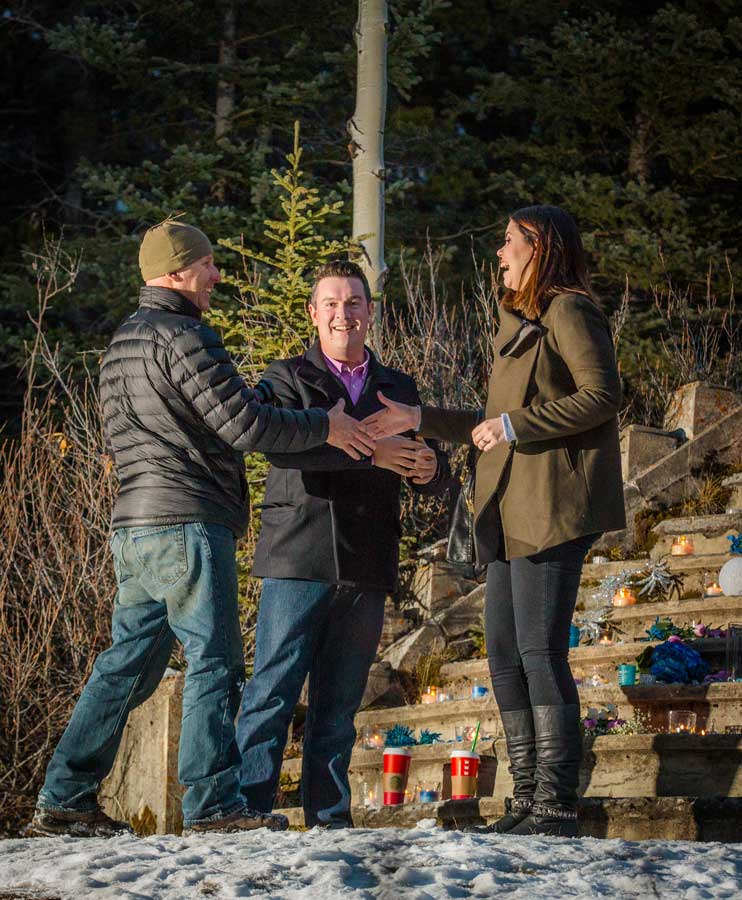 Thankfully the next folks to arrive were Andrew & Erin!

Andrew wasted no time in commencing his marriage proposal.  She excitedly answered “Absolutely!” and the rest of the night was history, as they say, for Andrew & Erin and the story of their love.

Congratulations to the happy couple!  We wish you all the best in planning your wedding.  Thank you for trusting us to capture these first beautiful moments of the rest of your life together.

I hope sharing this experience gave you a few ideas on how to propose to your fiance.  (Or how you would like your fiance to propose to you!)  Whatever you decide to do, one thing is certain–capturing that moment when she says “yes” is a great way to go!  The images created during this exciting time are a priceless addition to your love story.  It is also a fabulous way to impress your future partner, showing them just how much you care.

Andrew & Erin both wrote a wonderful testimony of their experience that night which you can read at: /banff-photographers-reviews/

Contact us today to learn more about our services.